The real scoop on the Automakers Bailout (GM, Ford, Chrysler) 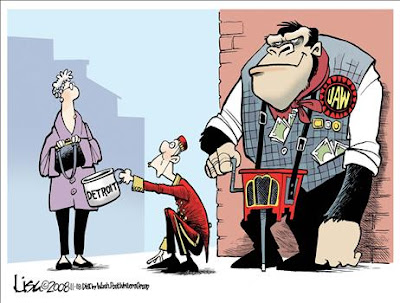 I don't know the original source for this article that I received via email, but it's a good read.

According to Forbes: Labor cost per hour, wages and benefits for hourly workers.

Bottom Line: The average UAW worker with a high school degree earns 57.6% more compensation than the average university professor with a Ph.D., and 52.6% more than the average worker at Toyota , Honda or Nissan.

Many industry analysts say the Detroit Three, must be on par with Toyota and Honda to survive. This year's contract, they say, must be "transformational" in reducing pension and health care costs.

What would "transformational" mean? One way to think about "transformational" would mean that UAW workers, most with a high school diploma, would have to accept compensation equal to that of the average university professor with a PhD.

Then there's the "Job Bank"
When a D3 ( Detroit 3 carmaker) lays an employee off, that employee continues to receive all benefits - medical, retirement, etc., etc., PLUS an hourly wage of $31/hour.

Ken Pool is making good money. On weekdays, he shows up at 7 a.m. at Ford Motor Co..'s Michigan Truck Plant in Wayne , signs in, and then starts working -- on a crossword puzzle. Pool hates the monotony, but the pay is good: more than $31 an hour, plus benefits.
"We just go in and play crossword puzzles, watch videos that someone brings in or read the newspaper," he says. "Otherwise, I just sit."

Pool is one of more than 12,000 American autoworkers who, instead of installing windshields or bending sheet metal, spend their days counting the hours in a jobs bank set up by Detroit automakers as demanded by the United Auto Workers Union - UAW - as part of an extraordinary job security agreement.

Now the D3 wants Joe Taxpayer to pick up this tab in a $25 Billion bailout package - soon to be increased to $45 Billion if Nancy Pelosi and Hillary Clinton have their way.

The "Big 3" want this money - not to build better autos. They want it to pay the tab for Medical and Retirement benefits for RETIRED auto workers. Not to make them more competitive, or to improve the quality of their cars.
Posted by Unknown at 4:18 PM